The 1937 Home Owners Loan Corporation map of Indianapolis identified neighborhoods that were “high risk” for loans in red, which included all the city’s African-American neighborhoods (click on map for larger view).

Few dimensions of contemporary Indianapolis’ landscape could be less invisible than the suburban homes that ring the city in nearly every direction. As in many cities, the population of Indianapolis swelled during World War II, with laborers migrating to industrial workplaces throughout the city and military labor at Fort Benjamin Harrison (PDF). Between 1940 and 1942, 9000 new homes were built in Speedway and Warren Township to support wartime workforces on the city’s margins, and another 52,000 homes were built in the city in the 1950’s. However, very few of them became homes to African Americans; even wealthy African Americans were systematically excluded from federal loans, and White realtors almost universally resisted neighborhood integration. 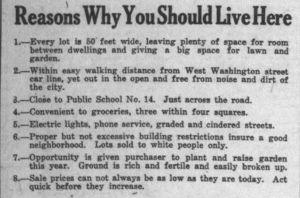 Postwar suburbanization is often painted as an ocean of interchangeable tract housing fronted by White nuclear families. Many of the post-war Indianapolis suburbs were indeed almost universally White, a pattern common throughout the country. This was a direct reflection of federal policy that expressly segregated the nation. Federal Housing Administration loans were provided to 10 million new homeowners between 1946 and 1953, but the FHA required suburban planners to restrict the sale of homes to Whites, a practice often referred to as “redlining” (for a fascinating comparative study, see Redlining Richmond). The FHA specifically decreed that if “a neighborhood is to retain stability, it is necessary that properties shall continue to be occupied by the same social and racial classes.” The FHA considered Black residents “adverse influences,” and they explicitly rejected loans in racially mixed neighborhoods and considered nearly all Black neighborhoods too risky for mortgage insurance. 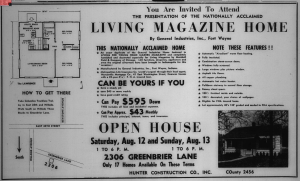 Seventeen homes were advertised in the Indianapolis Recorder in 1950 along Greenbrier Lane on the eastside.

African Americans settled in a handful of suburban neighborhoods in places like Indianapolis. On the near-Eastside, for instance, Tobey Developers managed several suburbs including Kingsly Terrace and Douglas Park Homes, which lay just east of Douglass Park in the early 1960s. Seventeen homes in a nearby neighborhood along Greenbrier Lane had been advertised in the Indianapolis Recorder in August, 1950. Oak View opened in that same neighborhood in 1961, with one of the city’s most prominent African-American realty professionals, W.T. Ray, as the sales agent. Twin Oaks opened in 1963 on the Southside beside Bethel Park.  In 1965 Green Acres advertised to African Americans for a Southside community on Troy Avenue, now alongside Interstate-65. On the northwestside Cold Spring Heights began clearing lots near 44th Street and Knollton in 1969.  Many of these neighborhoods have survived, and a handful of first-generation settlers continue to live in their homes a half-century after moving in. (This flickr page includes a sample of advertisements from the Indianapolis Recorder for African-American suburbs in the Circle City). 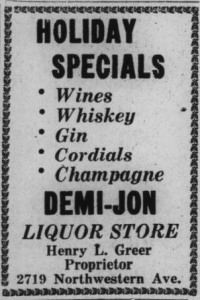 Perhaps the best-known of these African-American suburbs was in Washington Township near what is today 64th Street and Grandview Drive. The first African American residents along the northern stretches of Grandview Drive were Henry L. and Della Greer. Henry Greer served in the Army in World War I and married Della Wilson in 1926. Henry Greer opened a liquor Store on North West Street in December, 1935, and his wife Della Wilson Greer was an art teacher at Crispus Attucks High School, where she taught for 20 years beginning in 1936.

The Greers moved to Grandview Drive by June, 1946, when the Indianapolis Recorder reported on a reception at their Washington Township “country home”: 10 miles from the city center, the home is now surrounded by neighborhoods in all directions, but Grandview was still a dirt road, and most of the present-day suburban home lots were farm fields after the war. A small plate at the gate identified the 3500-square foot, five-bedroom home as “Shangrila.” Dr. Edward Paul Thomas and Ruby Leah Thomas became their neighbors around 1952, settling in the home immediately south of the Greers at 6235 Grandview Drive. 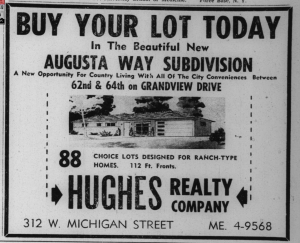 This advertisement for Augusta Way appeared in the Indianapolis Recorder in January, 1956.

The surrounding landscape would eventually be the heart of a series of predominately African-American suburbs that included Augusta Way, Grandview Estates, Northshire Estates, and Greer-Dell Estates. In 1955 developers and realtors began constructing the first of these communities, Augusta Way, a “modern suburb” directly across from the Greers’ home on Grandview Drive. A December advertisement heralded 88 available lots in the Augusta Way subdivision bordered by 62nd, Coburn, and 64th Streets and Grandview Drive. African American realtor C.J. Hughes acknowledged that the community was a response to suburban segregation, telling the Indianapolis Recorder that “`This subdivision meets the demands of many particular people and families with middle incomes and higher who want good modern homes in locations commensurate with their investments.’” A 1956 advertisement clumsily acknowledged the class exclusivity in Augusta Way, noting the community had “Reasonable Restrictions.” (This page links to a PDF inventory of some of the earliest residents in the Grandview neighborhood.)

The developer of the Augusta Way subdivision, George W. Malter, named W.T. Ray as a sales agent in February 1956. Ray began offering up lots for $500 down. A 1956 aerial photograph appears to reveal construction in only one lot in the subdivision, which became 1605 Kenruth Drive and was the home of W.T. Ray. Ray had a profound influence on the African-American suburbs as one of Indianapolis’ most active real estate professionals, and he was among the most influential figures in Indianapolis’ postwar African-American housing and civil rights movement. The Connecticut native spent much of his childhood in Caldwell, New Jersey, where his father was the superintendent of an apartment house. Ray studied business administration at Oberlin College and then Western Reserve University in Cleveland, and he was working in retail sales when he enlisted in the Army in 1941. Ray served in the South Pacific in World War II, where he was in the segregated 93rd Division’s Chemical Warfare unit.

A 1957 ad for an Augusta Way home at the corner of 64th and Grandview.

An October 1957 advertisement by Ray heralded a home in Augusta Way that was nearing completion for Earl and Vanessie Seymour. The advertisement’s detailed description of high-quality materials and design violates the stereotype of suburban homes simply as interchangeable architecture. The Seymours’ ranch home was “designed by architect Joseph B. Johnson” and featured “fireplaces in living room and basement recreation room, 3 bedrooms, all electric kitchen with custom built cabinets of South Carolina Birch, baked Pink finish, [and] an attractive family room off of the kitchen adds a cheerful note of informality to this comfortable home. Imperial Black Marble sills, remote control lighting and the best in plumbing fixtures typify the high quality workmanship and materials that go into homes in this Northside subdivision.”

Many of the homes along Grandview departed from the caricature of homogenous suburban architecture and interchangeable middle-class taste. In 1957, for instance, the Greers’ home was included on an Alpha Kappa Alpha Tour of Homes, and the newspaper article noted that the Greers’ home “was designed by Mrs. Greer to utilize all the phases of nature and to display her extensive collection of beautiful antiques.” A 1960 description of Frank and Georgia Stewart’s home at 6525 Grandview indicated that “Mr. and Mrs. Stewart drew and executed their own plans in building their home,” much as Della Greer had done. Like Della Greer, the Stewarts’ home featured antiques, including “an antique love seat carved from Chinese teakwood that is over 600 years old.” The house featured other conspicuous decorative goods, with the newspaper noting that “Mrs. Stewart has an affinity for wallpaper and every room is uniquely papered. . . . The master bedroom is done with a `Madame Butterfly’ and the paper in the second bedroom is called `Golden Pheasant.’ Visitors will note the kitchen wallpaper shows the calorie counts of many foods.” 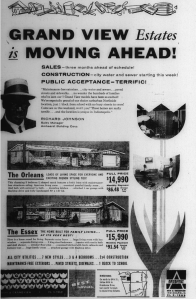 In October, 1962 neighborhoods north of Augusta Way began to be constructed, including Grandview Estates.

Like many American suburbs, neighbors participated in numerous social events and were members of community groups. For instance, the Seymours were members of the Federation of Associated Clubs, an organization that lobbied for civil rights and upheld middle-class behavioral codes. Della Greer was a long-term member and secretary of the Delphinium Garden Club, whose mission was “to develop genuine appreciation for the healing power of nature’s bounty and beauty in a perplexed world.” Frank and Georgia Stewart hosted meetings of the National Idlewild Lot Owners Association, a Black resort in Michigan where Madam C.J. Walker and W.E.B. Du Bois had been among the property owners. Many other residents vacationed together at their properties at Fox Lake, a segregated resort near Angola, Indiana.

The Grandview suburbs were sometimes rhetorically caricatured by African-American peers as an insular Black bourgeois. In 1966, Indianapolis Recorder columnist Andrew W. Ramsey complained that “many of the Negroes who have struck it rich so to speak in the post war economy decided to escape the ghetto by building split level and ranch type homes out in the suburbs. Now hundreds of Negroes live in Washington Township outside in showplace homes and gress [sic] covered acreage. As they have moved in the whites nearby have moved out to be replaced by Negroes and so we have gained another ghetto but this time it is a golden ghetto.” Ramsey lamented that the main thoroughfare “leading out to this new sepia heaven is beginning `to go colored’ so that one may pass from the inner city main ghetto out to the golden without passing too many white homes.”

In 1963 Kingsly Terrace advertised the near-Eastside community with the stories of new residents, including Mr. and Mrs. William Mason.

Ramsey’s polemics were perhaps less about suburbia than they were about segregation, and he was correct that most African-American suburbs remained racially segregated well into the 21st century. However, Ramsey and many other commentators invoked the suburbs as a rhetorical stereotype symbolizing superficial class pretentiousness. Like many observers he failed to examine why residents were attracted to the suburbs. Many of those reasons along Grandview were common to nearly any suburb: accessible schools, social links between neighbors, open space, and a community spirit were invoked in a broad range of suburbs. Some Augusta Way residents sought to escape unpleasant urban conditions, and many African Americans shared a strong notion of moral respectability and personal dignity that was under constant attack in segregated cities.

Most African Americans simply did not see any incongruity in their desire for a suburban home: they saw home ownership and personal dignity as privileges that should be extended to any disciplined and respectable citizen. Consequently, the appearance of suburban conformism was not apolitical as much as it reflected a quiet imagination of Black citizenship that was largely unexpressed beyond Grandview Drive and is often unrecognized today.

Kyle Huskins is developing this work for his Master’s Thesis research, and some of the work in this blog was done by students in my African-American Suburbia class in Spring 2016.

2009 The Culture of Property: Race, Class, and Housing Landscapes in Atlanta, 1880-1950. University of Georgia Press, Atlanta.

2010 Places of Their Own: African American Suburbanization in the Twentieth Century.  University of Chicago Press, Chicago.

3 thoughts on “Suburbanization and the Color Line along Grandview Drive”